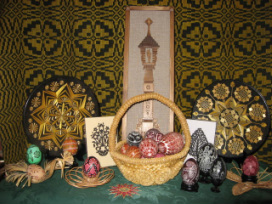 Traditional Lithuanian folk art developed from the bare necessities of life, when people built their own homes, farmed land, and wove all material for clothing. The Lithuanians lived under natural isolation in the forests along the Baltic coast which allowed them to keep their ancient traditions.  Lithuanian folk art reached its peak during the 18th and 19th century.

Years ago, road side wooden crosses dotted the Lithuanian countryside. Thousands could be found on hilltops, homesteads, graveyards, and elsewhere. A great deal of care and creative imagination is used in making theses elaborate crosses. Many designs included radiating sunbeams, arrows, crescents, lilies and tulips. Skilled Lithuanian craftsman also carved intricate figurines out of wood. The most carvings were figures of Christ and the Virgin Mary. The most popular design was Rupintojelis (Sorrowing Christ), which depicts a sitting the meditating Christ, resting His head on his hand.

By: Carol A. Luschas Knights of Lithuania C-144