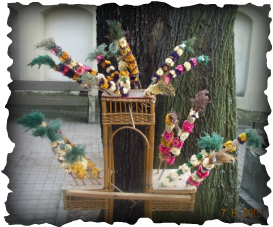 Traditional Lithuanian "Verbos."
In Lithuania, the name "Palm Sunday", is a misnomer. Most natives have never seen a palm, since it grows is warm humid climates. Consequently, the "verba" or "dwarfed spuce" is used in instead. It is with these branches that people go to church on Palm Sunday, each bringing his own branch to be blessed.

On the Saturday before Palm Sunday the Lithuanians take special care in choosing and cutting well-formed  branches, which the women-folk decorate with with flowers. They flowers are meticulously  tide onto the branch.

The "verbos" are blessed during Mass and  later brought home and dried. The needles were pulled off,and  the bare branches are placed behind a holy picture or in the rafters for protection. The needles are saved in a bag and are used as incense during thunderstorms and sicknesses and deaths. An old Lithuanian custom is to beat each other with the verba branches. Even to this day, the saying goes that one must be hit with the verba to remain healthy during the coming year. The father hits his children on their bare legs while they are still sleeping on Palm Sunday to wake them up for church.

When hitting one with the verba you say, "Ne as musu, be verba musa" ( I do not hit you but the verba hits you.) One can ransom himself from the beating by promising the "beater" an Easter egg (margutis).

Beating each other with a green  branch has its origins in ancient times, when all greens had a special significance, like Christmas holly and mistletoe' s symbolism. So the juniper branch had a special power attached--its touche would give you new life and prevent sickness.

Later, with the influence that the church's blessing gave them, the power to chase Satan away was attached to it. Being blessed, it becomes a sacramental and as such we believe it will ward off evil.

Yanulaitis J. Lithuanian Customs and Other Ethnic Cookery: Knights of Lithuania Anthracite Council #144. 1988 pg.15.
Easter Foods
The Foods traditionally blessed for Easter, the feast of Lord's Passover from death to life, are the foods which God prescribed for the ancient Passover meal; lamb, bread, and bitter herbs.

The lamb, either meat or a symbolic lamb in the form of a cake or butter, is the ancient symbol of Passover food by whose blood the Israelites were saved. Jesus is our Paschal Lamb by whose blood we are saved.

Ham celebrates the freedom of the New Law, which came into effect through Jesus' resurrection, in distinction to the Old Law, which forbade certain meats. Sausages is an ethnic addition to enhance the celebration; its links remind us of the chains of death which were broken when Jesus rose.

Bread reminds us of Jesus, the risen Lord, who in the Eucharist is the food of our earthly journey and the true bread of everlasting life.

Eggs are a sign of hope and resurrection. Jesus comes forth from the tomb as the chick breaks the shell at birth. Because of the special meaning, it is fitting that the eggs to be blessed the decorated with of symbols of Easter.

Horseradish represents the butter herbs prescribed in the original Passover meal as a reminder of the bitterness and harshness of life in Egypt. It reminds us of the bitterness of Jesus' Passion by which He entered into glory. Other foods may be blessed, also.

Wine is the drink of the Passover meal and the Last Supper. Its sparkle reminds us of the glory of Easter. Wine gladdens our hearts and helps us enter into the joy of the Resurrection. 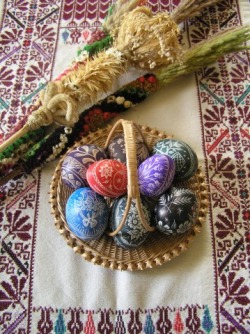 Traditional Marguciai
The country of Lithuania uses two methods of decorating eggs also known as "marguciai." The first, an engraved method, uses a blade to scratch or carve designs on a dyed egg. The second consists of the use of  hot wax applied with the head of a pin. Patterns form by using a series of dots and "tailed" dots to form rosettes.

Mystical Powers of Easter Eggs
People of the Lithuanian countryside believed that decorations added to the already mystical powers of the egg. A decorated egg afforded its owner protection from life's disasters and brought luck and good fortune. The head of the household would bury a decorated egg at the threshold of the front door to his home as a way of protecting his home and family. Decorated eggs were also buried in the stable to protect the animals, in the fields to assure a plentiful harvest, and in the orchard to make the trees fruitful. It is no wonder  that decorated eggs were welcome  gifts and prized possessions. 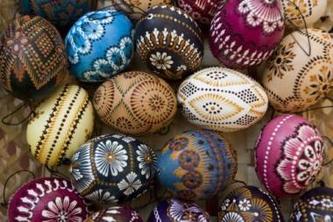 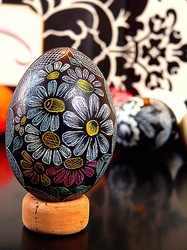 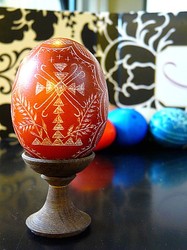 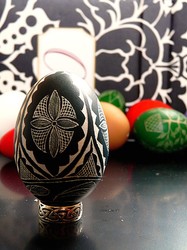 Go to www.lithuanianeggart.blogspot.com for more information about the artist, Christine Luschas,  and her artwork. These eggs and more are for sale on this site.